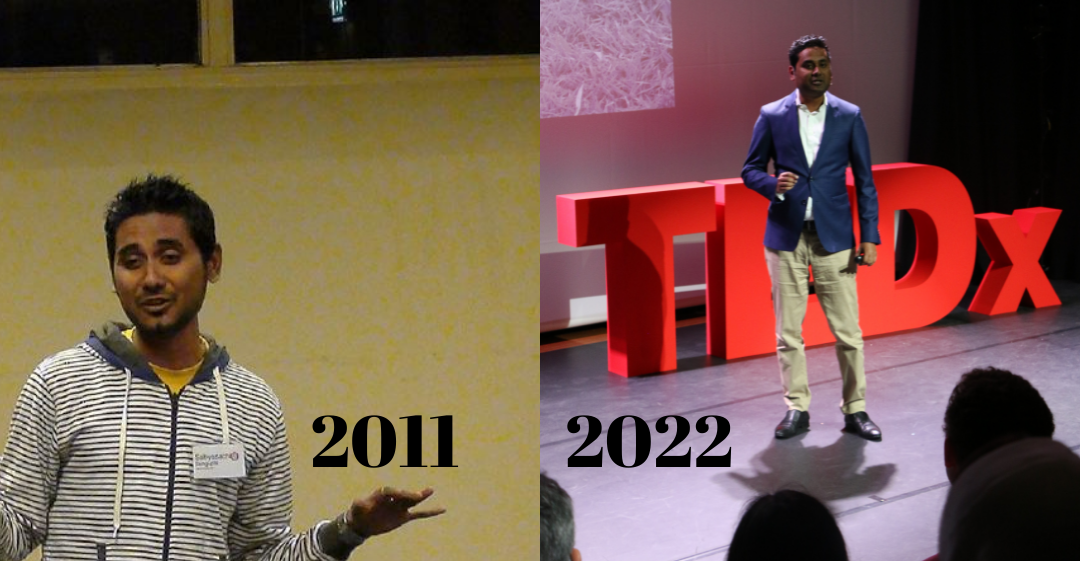 A journey from timid to TEDx

In April 2022, I gave my second TEDx talk, and this time in the Netherlands. It was one of the best stage experiences I ever had. I was able to make the audience laugh, think and act on my advice. That feeling is the most rewarding feeling as a speaker. But the journey towards the TEDx began several years back.

In 2010, when I moved to the Netherlands, the Dutch autumn weather, “delicious” Dutch food, and the feeling of homesickness made my mood gloomy. And there was the added pressure of getting good grades at the university and finding a job in a recessionary market.

I had no friends, no money, no confidence, and I wanted to find a job, find like-minded people, and most importantly, integrate in the Dutch society and have local friends.

Reflecting on the last 11-12 years, how did learning and practicing public speaking help me to be the person I am today?

1. Confidence to speak and also to be quiet – Public speaking is not only about being on stage and delivering a talk. It is about learning how to speak and make an impact. I remember how, in my early days in the Netherlands, whenever I felt a bit overwhelmed, I found myself speaking less. But practicing public speaking gave me the confidence that when I would speak, even just for 2 minutes, people would listen and understand.

2. Handle Dutch directness – The one thing every expat is warned about when they come to the Netherlands is the Dutch directness. It is an acquired taste. It can sound rude and arrogant, but then you understand it is just their way of expression. But how you handle this directness is an art. Sometimes it can leave you speechless, or angry or offended, and that did happen to me. But over time, I was able to collect myself with a comeback answer to express my feeling, opinion or reaction in a palpable way (not the Dutch way). This art of giving a dignified, firm answer on the spot, I developed thanks to practicing more and more impromptu public speaking.

3. Tell stories about my culture – To many of my Dutch and European friends, I was their first Indian friend, so they were often curious and asked me many questions. The questions ranged from Indian gods to the caste system, food habits, and the role of women in society. I never felt uncomfortable with these kinds of questions, on the contrary, I took this as an opportunity to tell my friends and colleagues about India through stories, presenting both vice and virtues. Stories are the most excellent way to make a point without being perceived as preachy, biased or prejudiced. Storytelling skills helped me share about my background, my journey and my opinions in my post personal way.

4. Pick up social cues – One of the greatest lessons in public speaking is to read body language, and that is a tremendous help, especially when you are in a country whose native language is unfamiliar to you. Dutch was completely unfamiliar to me, but the body language accompanying it often gave me an insight to how my colleagues and friends were feeling or what they were trying to express.

5. That one moment when I had to speak – I was often the youngest person in a team, and most of the team meetings, offsites and outings were dominated by the words and presentations of senior management. Every now and then I got an opportunity to stand up and speak. Whereas previously I might have shied away, I now not only grabbed them with both hands, but I made my presence felt. 10-12 years later, my professor and friend from the university still remembers me debating at one of our courses. Similarly at work, the few presentations I did, are still being remembered. Being able to make this kind of impact was only due to the fact that I was continuously learning and practicing public speaking skills.

6. Make your small talks memorable – We often underestimate the power of small talks. Those small talks of 1 or 2 minutes that you can have with a colleague at the coffee place or when you are waiting for the lift can be the thing that make you memorable. The public speaking skill of creating impact with few words, either through emotion or humor or something special, helped me build a network in the Netherlands.

A journey of thousand miles begins with a single step, and that one step for me was learning, practicing and loving public speaking. The dreaded public speaking became my best friend, my enabler, and my source of confidence. With that one skill, I have dared to stand in front of thousands of people and make an impact, win 2 times European championship and 6 times the Netherlands championships of public speaking, and make it on to the prestigious TEDx stage and share my idea. And the best part? The learning never stops. I am still learning every day, finding new ways to inspire, persuade and present through public speaking.

If you make friends with this one skill, then trust me, the sky is the limit. That’s my journey from timid to TedX.

Share
Previous PostGratitude in Attitude
Next PostWhat is the Speaking Pyramid?

The Rule of Three- Best tip in Public speaking

What is the Speaking Pyramid?

A journey from timid to TEDx